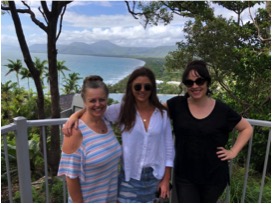 Journalists from around Australia visited the Port Douglas and Daintree region recently as the promotional campaign for Port Douglas Carnivale 2019 gets underway.

Hosted by Tourism Port Douglas Daintree, the journalists were given a taste of Port Douglas and the town’s annual event held on May 24-26.

The journalists, bloggers and social media influencers sampled what the region had to offer including drifting down Mossman Gorge, stepping out on a Ngadiku Dreamtime Walk, snorkelling the Great Barrier Reef, and browsing Port Douglas markets.

The contingent of 10 national and local journalists also had a sneak peek at the great line up of Port Douglas Carnivale events with a showcase dinner under the stars at Rex Smeal Park.

While in town, the group was wined, dined and hosted by some of the region’s best including Barbados, Salsa Bar & Grill, Silky Oaks Lodge and Pullman Port Douglas Sea Temple and Spa.

The promotional campaign offers media a snapshot of Port Douglas Carnivale – all while enjoying the town’s tropical style and sophistication.

Douglas Shire mayor Julia Leu said the media familiarisation was an effective way for Tourism Port Douglas and Daintree (TPDD) to market the region and this much loved annual event, which is celebrating 25 years in 2019.

“Having local and national media here – from the ABC to Triple M to New Idea – on a well-designed and well executed promotional tour ensures the region is shown across Australia at its very best,” she said.

As well as the national activity, the Port Douglas Carnivale promotional campaign will also extend in coming weeks to regional areas of north Queensland, with a mix of newspapers, online advertising and lifestyle publications.